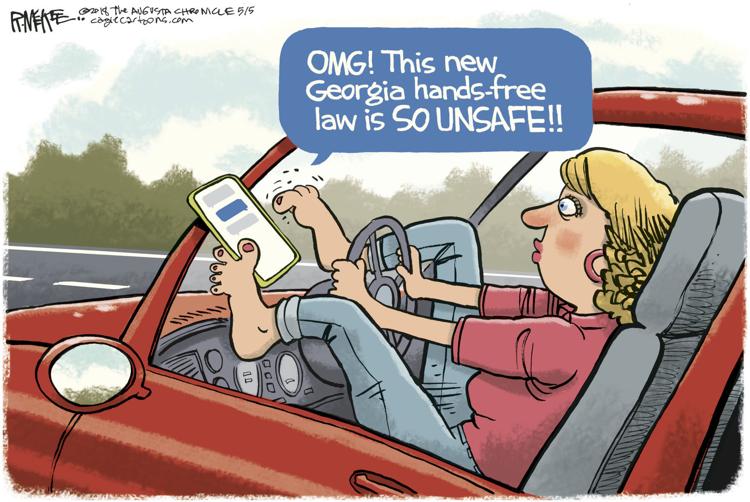 As we already know, I love incorporating memes into my blog posts, so I felt as if this cartoon was quite fitting in a post about the new hands-free law. The Georgia Hands-Free Law (HB673) has been in effect for one month as of today! I figured that 1 ACT Driving Schools should do a piece on this law, since I have already witnessed many people blatantly breaking this law and staring at their phone while driving. Of course, I can’t always blame people for not knowing about the law, since it wasn’t publicized the way it should have been, but that’s neither here nor there. I believe that, as a driving school, it’s our job to provide people with important information like this for their safety.

The law is quite simple: don’t touch your phone while driving. Of course, it’s more in-depth than that, but I basically summed it up with that line. I’ll break it down piece by piece from information gathered from the Governor’s Office of Highway Safety (GOHS):

The penalties for using your phone while driving are as follows:

The 2nd and 3rd offense fines are only applicable if the driver has been convicted once within a 24 month period; after 24 months, only 1 point and a $50 fine will be incurred. First offenders can have their charges dropped by proving that they have obtained a hands-free device since being ticketed (GOHS).

Contrary to popular belief, there is no 90-day grace period (Hands Free Georgia). The hands-free law went into effect immediately starting July 1, 2018, and has been enforced ever since. Over 1,000 tickets were written as of July 11th! In fact, Georgia state troopers wrote over 1,000 formal warnings and 320 citations alone by July 11th (AL.com). Georgia police officers are taking this law very seriously, as should we to avoid hurting others.

One question remains: will this actually work, or will people just get more creative about using their phone while driving? Well, if we look at the statistics from other states with the same law, it seems as if this law will be VERY effective. Georgia is the 16th state to institute a hands-free law, and the other 15 states saw a 16% decrease in traffic fatalities within the first two years of the law’s institution. It will be interesting to take a look at Georgia’s statistics over the next two years to see the effect of the hands-free law, but I’m very sure I will see an decrease in traffic fatalities as well (Hands Free Georgia).

I hope that you found this to be informative and helpful in understanding the hands-free law! Our hope is that we don’t have to meet anyone who got ticketed for breaking this law because people have the information and take the law seriously, but we’re all human and we all make mistakes, so breaking this law is bound to happen. We get it—we’re guilty of picking up our phones for a second too just to check the text message that just came in. That’s why we’re here to help you if you find yourself in a situation where you receive a ticket for this. By taking the defensive driving class, you can remove up to 7 points on your driver’s license every five years! For more information on the defensive driving class, click here.

Of course, the 1 ACT Driving Schools recommendation is that drivers leave their phones off to the side while driving and avoid checking it. Think of it this way: you don’t want to have to pay $95 AND sit through a 6-hour class just to keep your license point-free. The easiest solution is to avoid touching the phone and just drive. Stay safe out there, and don’t forget to remain hands-free!